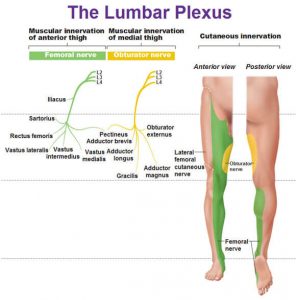 Lumbosacral Plexopathy : Recently I had a patient present with footdrop (foot drops and drags as you walk due to weakness in dorsiflexor muscles), also severe pain down the leg, along with lumbar-sacral pain(lower back area). Initially this might appear to be signs of disc herniation with nerve root compression, even though the footdrop would be fairly uncommon with that condition. An MRI showed the spine to be normal. We also looked at anything that might have injured the peroneal nerve which is quiet close to the skin on the lower leg, which in itself could cause the footdrop, but there was no sign of injury. We were also able to rule out diabetes which can lead to nerve damage.

So where did we go next? Answer : An electromyography (EMG)(nerve conduction study). Electromyography is a diagnostic procedure used to assess the health of muscles and the nerve cells that control them (motor neurons). EMG results can reveal nerve dysfunction, muscle dysfunction or problems with nerve-to-muscle signal transmission. As a result of this testing by a specialist, the client was diagnosed as having a Lumbosacral plexopathy. In this case it seemed that the nerve had been damaged by a viral or bacterial infection. More tests need to be done to confirm and treat this infection.

The lumbosacral plexus represents the nerve supply to the lower back, pelvis and legs. Lumbosacral plexopathy is characterized as inflammation and or damage to the nerve bundles in the area of the lumbar and sacral vertebrae regions. Symptoms may include shooting or burning pain, numbness, and decreased movement in the thigh, buttock and/or leg area. It is an uncommon idiopathic disorder(relates to or denotes any disease or condition which arises spontaneously or for which the cause is unknown). It is characterized by the acute onset of severe lower extremity pain followed by wasting and weakness of leg muscles along with variable sensory loss.

There patient complains of a deep boring pain in the pelvis that can radiate posteriorly into the thigh and down into the posterior and lateral calf.

The ankle reflex may be depressed or absent.

Sensory symptoms and signs may be severely deminished over the posterior thigh and posterior-lateral calf and in the foot.

Other Causes of Lumbosacral Plexopathy

Physiotherapists in Tralee  Phone 086-7700191 to discuss your condition or to make an appointment.