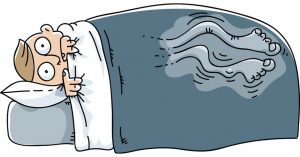 Restless legs syndrome(RLS) is a nervous system disorder resulting in an urge to move the legs. Because it usually interferes with sleep, it also is considered a sleep disorder. The condition causes an uncomfortable, “itchy,” “pins and needles,” or “creepy crawly” type feeling in the legs. These sensations are usually worse at rest, especially when lying or sitting. The symptoms are generally also worse in the evening and at night. The severity of RLS symptoms varies from mild to intolerable. Symptoms can come and go and vary widely in severity. For some people, symptoms may lead to severe sleep disturbance at night. This can significantly impair their quality of life.

Who Gets Restless Legs Syndrome?

It is estimated that ”Restless legs syndrome” (RLS) affects up to 10% of the population. It affects both sexes, but is more common in women. The condition may begin at any age, but most people affected are middle-aged or older. RLS is often unrecognized or misdiagnosed. This is especially true if the symptoms are intermittent or mild.

In most cases, doctors do not know the cause of restless legs syndrome. It is suspected that genetics plays a role. Nearly half of people with RLS also have a family member with the condition. Factors other than genetics are associated with the development of restless legs syndrome. Certain chronic diseases and medical conditions can cause RLS. These include iron deficiency, Parkinson’s disease, kidney failure, diabetes, and peripheral neuropathy. Treating these conditions often gives some relief from RLS symptoms.

Some types of medications may exacerbate symptoms. These include anti-nausea drugs, antipsychotic drugs, some antidepressants, cold and allergy medications containing sedating antihistamines. Women can experience RLS during pregnancy, especially in the last trimester. These symptoms usually go away within a month after delivery. Other factors, including alcohol use and sleep deprivation, may trigger symptoms or make them worse.

There is no medical test to diagnose RLS. Doctors. However, blood tests or other diagnostic tests may be used to rule out other conditions. The diagnosis of RLS is based mainly on a patient’s symptoms and history .

Treatment of RLS is targeted at easing the symptoms. In people with mild to moderate restless legs syndrome, lifestyle changes, such as beginning a regular exercise program , establishing regular sleep patterns, and eliminating or decreasing the use of caffeine,alcohol and tobacco, may be helpful.

Non-drug RLS treatments may include:

Medications may sometimes be helpful in treatment of RLS but results vary among individuals. Drugs used to treat RLS include:

Dopaminergic drugs, which act on the neurotransmitter dopamine in the brain; Mirapex, Neupro, and Requip, levodopa.

Benzodiazepines, a class of sedative medications, may be used to help with sleep, but they can cause daytime drowsiness.

Narcotic pain relievers may be used for severe pain.

Anticonvulsant drugs  such as Tegretol, Lyrica, Neurontin,  and Horizant.

Although there is no cure for restless legs syndrome, current treatments can help control the condition, decrease symptoms, and improve sleep.