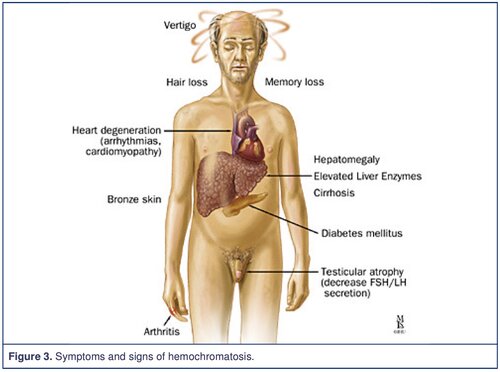 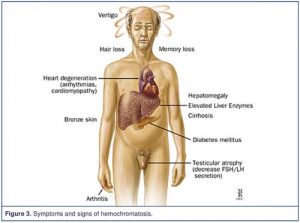 Haemochromatosis is a inherited condition where iron levels in the body increase over many years leading to iron overload. If the condition is not treated, it can lead to damage in certain parts of the
body such as the liver, joints, pancreas and heart. Haemochromatosis most often affects people of white Celtic/northern European ethnicity such as from Ireland, Scotland and Wales.
In advanced cases of haemochromatosis, the high levels of iron can also damage the joints. Many older people with longterm haemochromatosis experience arthropathy with associated joint pain. Haemochromatosis arthropathy, or joint disease(arthritis), can lead to progressive thinning and loss of cartilage within the joints. It can also result in bone bruising, damage and osteophyte formation around the edge of the joint causing pain.

The main symptoms of haemochromatosis are:

There’s currently no cure for haemochromatosis. There are however treatments that can reduce the amount of iron in your body. This can help relieve some of the symptoms and reduce the risk of damage to organs such as the heart, liver and pancreas.

The most commonly used treatment for haemochromatosis is a procedure to remove some of your blood, usually about 500ml at a time, from a vein in your arm. known as a phlebotomy . The removed blood includes red blood cells which contain iron, thus reducing the amount of iron in your body.

There are 2 main stages to treatment:

Chelation therapy may be used in a small number of cases where regular phlebotomies are not possible, because say for example, you have very thin or fragile veins. This treatment involves taking medicine that removes iron from your blood and releases it into your urine or poo. One such medicine is called deferasirox. It comes as a tablet that’s usually taken once a day. It’s unlicensed for the treatment of haemochromatosis, which means it has not undergone extensive clinical trials for this use. But your doctor may recommend it if they feel the possible benefits outweigh any risks.

It may be possible to relieve the painful symptoms of haemochr0matosis with painkillers and steroid medicine. However, If significant damage has occurred, it may be necessary to replace the affected joint with an artificial one, such as a hip replacement or knee replacement.

To make an appointment, get a second opinion or discuss your condition contact us.