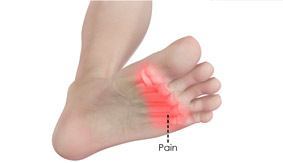 Some more information on the condition can be found at http://www.runnersworld.com/injury-prevention-recovery/metatarsalgia

Physiotherapist and Physical Therapists  is based in Tralee , Co. Kerry and open 7am to 11 pm weekdays, 7am to 2pm Saturdays. I also hold a clinic in Dingle on wednesdays. Please ring 086-7700191 anytime to make an appointment. We also specialise in proper deep tissue massage.