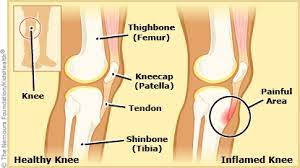 Osgood Schlatter disease is an inflammation of the bone, cartilage and/or tendon at the top of the tibia (shinbone ie. just under the knee), where the tendon from the kneecap(patella) attaches. It presents as a painful lump below the kneecap. It usually strikes active adolescents during growth spurts which can begin any time between the ages of 8 and 13 in girls, 10 and 15 years  in boys, basically during puberty.  Growth spurts make kids vulnerable because their bones, muscles, and tendons are growing quickly and not always at the same time. With exercise, these differences in size and strength between the muscle groups place unusual stress on the growth plate at the top of the shinbone (A growth plate is a layer of cartilage near the end of a bone where most of the bone’s growth occurs. It is weaker and more vulnerable to injury than the rest of the bone).

While  Osgood Schlatter disease  is more common in boys, the gender gap is narrowing as more girls become involved in sports.  Osgood Schlatter disease  affects as many as 1 in 5 adolescent athletes. Teens increase their risk if they play sports involving running, twisting, and jumping, such as basketball, football, volleyball, soccer, tennis, figure skating, and gymnastics etc. Doctors disagree about the mechanics that cause the injury but agree that both overuse and physical stress are involved. Most parents call the doctor after their child complains of intermittent pain over several months.

The pain varies from person to person. Some have only mild pain while performing certain activities. For others, the pain is nearly constant and can be debilitating. The good news is that Osgood Schlatter disease (OSD) is far less serious than its name suggests. Though it is one of the most common causes of knee pain in adolescents, it is really not a disease, but an overuse injury. The condition is self limiting and usually resolves itself within 12 to 24 months. A similar condition, ”Sever’s disease” occurs in children of the same age group down at the achilles tendon attachment and presents as heel pain. Again the condition is self limiting and the same treatment protocols apply.

While there is no evidence that rest accelerates the healing process, a reduction in activity usually reduces the pain. There is no need to rest completely. Pain should be the main guide as to limitation of activity. Tightness in  the quadriceps muscles may predispose to this condition. The athlete should commence a stretching program. Some massage therapy on the quadriceps  can be tried. Pain also can sometimes be relieved by icing the painful area(ice in wet towel) for 10 minutes at a time. Correction of any biomechanical abnormality, such as excessive subtalar pronation(feet turn out while running) should also be considered.

To sum up, this is basically a self limiting condition that adolescents generally grow out of (Brukner and Khan, 2011). Some stretching exercises  and modification of activities is generally the best and most cost effective course of treatment.

For more information or to make an appointment phone 086-7700191. Physiotherapists in Tralee, Co. Kerry.