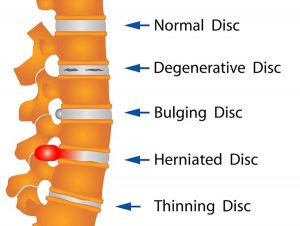 Your spine is made up of lots of bones called vertebrae and discs stacked on top of one another, forming the spinal canal. The nerves of the spinal cord run down the length of the spinal canal. The discs in act like shock absorbers between the vertebrae. These discs are made of two components: a softer center (called nucleus pulposus) surrounded by a tough elastic-like band (called annulus fibrosus). A bulging disc is like a squashed jam doughnut before the jam bursts out. The disc sags and looks like it is bulging outward. With a herniated disc, the outer covering of the disc has a hole or tear. This causes the nucleus pulposus (jelly-like center of the disc) to leak into the spinal canal. It is like the jam leaking out from the inside of a squashed jam doughnut.

Herniated and bulging discs are the most common causes of lower back pain, as well as leg pain or ”sciatica.” Between 60% and 80% of people will experience low back pain at some point their lives. Although a herniated disk can be very painful, most people feel much better with just a few weeks or months of nonsurgical treatment, such as using  muscle relaxants and anti-inflammatory medications, along with physiotherapy.  Long term management of these conditions needs to including properly prescribed strengthening and flexibility exercises in order to avoid surgery. Surgery is the final option.

For more on herniated and bulging discs, see video.

Physio in Tralee. Phone 0867700191 to discuss your condition or make an appointment.